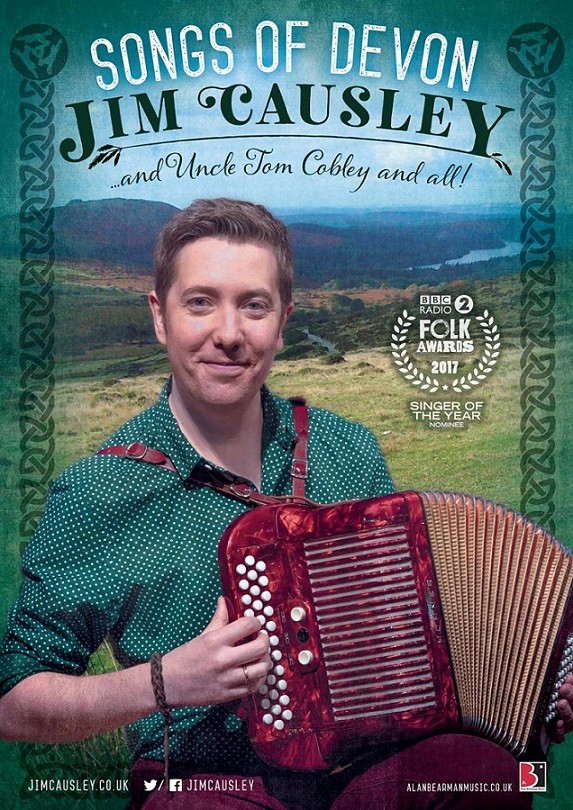 A proud Devonian, Jim Causley has dedicated much of his career to researching and reviving the forgotten gems of songs from his native western peninsula.

Drawing from the collections of Victorian folksong collectors such as Sabine Baring-Gould and Cecil Sharp as well as more modern collectors and writers including Cyril Tawney and Tony Rose, living singers as well as a few of his own self-penned hits, Jim presents an evening jam-packed with Devonshire delights that richly bring to life the distinct flavour of music-making from this unique corner of the British Isles.

From Arscott of Tetcott to Widecombe Fair and everything in between, this show is a thoroughly enjoyable introduction to Devon’s rich musical culture.

More than simply a folk-singer, multi award winning singer-songwriter and musician Jim Causley is an all-round entertainer and during the past decade Causley has been nominated no less than six times for a BBC Radio 2 Folk Award.

He won the Spiral Earth Singer of the Year award in 2014 and presented his own folk music show on BBC Radio Devon. In 2015 he worked with BBC TV historian Dr Sam Willis to create the music for his show 'Highwaymen, Outlaws and Villains' and was asked to perform his song about Dartmoor tin mining 'Pride of the Moor' on BBC TV's Countryfile - Dartmoor Special. 2017 was the centenary of Jim’s relative; the celebrated Cornish poet Charles Causley and a biographical film about the poet aired on BBC4 TV. The soundtrack was composed entirely by Jim and featured music from his 2013 album ‘Cyprus Well’ of musical settings of Charles’ work.

One of the most well-loved and respected figures of today’s contemporary roots and folk scene who has played, toured and recorded alongside Waterson:Carthy, John McCusker, Eddie Reader, Graham Coxson, Shirley Collins, Michael Morpurgo, Show of Hands, Kate Rusby, David Rotheray of Beautiful South fame and many more.

“The finest singer of his generation” - Mojo Magazine

“A voice in a million” - Geoff Lakeman

The Beehive will open an hour before the performance. The bar will be open and you will be able to take your seats in the auditorium 30 minutes before the start time. We encourage patrons to wear a mask when moving about the building and to respect social distancing. Please read our Covid safety measures ahead of your visit.