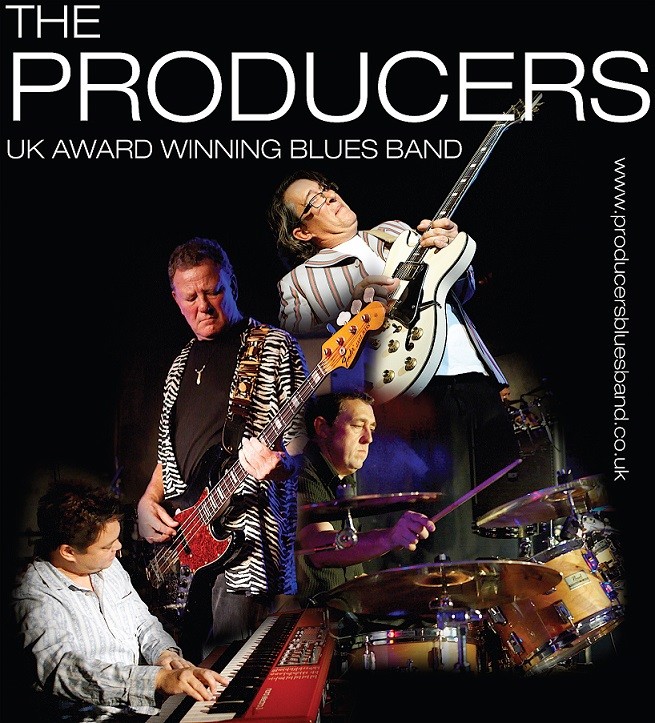 Following the enforced 2 year hiatus of live music The Producers, one of the UKs top blues bands, resume their touring schedule with an appearance at The Beehive.

Over more than 25 years they have had various members on drums, guitars, harmonica and keyboards - all accomplished musicians always supporting The Producers central core of band founders guitarist/vocalist Harry Skinner and bassist Dave Saunders. They have released 11 albums, the first Ain't no Love in the World winning the Blues Album of the Year award, with the last London Blues being on both CD and double vinyl LP and a brand new CD 25 Years' being recently released.

They have featured in session live on the Paul Jones show on BBC Radio 2 as well as the Johnny Walker and Bob Harris shows, received airplay around the world especially California where they seem to have a big radio following and Macedonia where they once shut down the phone lines to a radio station after it played a Producers track and was inundated with requests for more!

Their exciting stage show covers all aspects of Blues from pounding slide reminiscent of early Fleetwood Mac, easy listening Country blues reminding one of Leon Redbone to the smokin' Delta blues of Muddy Waters or Howling Wolf as well as their own self written repertoire - the show pleases all dedicated blues aficionados. They've had many guests appearing with them both live and in the studio including Jethro Tulls Martin Barre, the Blues Bands Dave Kelly, Ben Waters, The Groundhogs Tony McPhee, Andy Fairweather Low and the brass section of the Ray Charles Orchestra including the Raelets!

As well as Harry and Dave the present band also feature popular sessioneer Ray Drury on Keyboards and 'Biff' Smith on Drums. With this line - up The Producers are still out there playing the freshest live blues in Britain today. Concerned with feel and attitude rather than slavishly copying 'hand me down' American music, The Producers move effortlessly between their own well crafted material and seriously reinvigorated classics stamped with their own characteristic identity, having developed an impressive reputation over 25 years that no one can ignore.