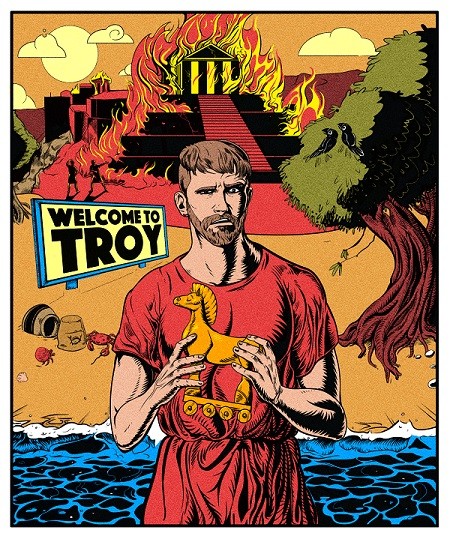 Troy – Something BC. A young bull herder accidentally eats a golden apple. Three Goddesses aren’t happy. And then 10 years later a city burns...

In this comedy, Assembleth Theatre breath new life into fire-side stories and the “real” history of ancient Greece is presented as never before.

The sort-of truth behind Achilles heel, the face that very nearly launched a thousand ships, the twelve accidental labours of Hercules and much more will be revealed.

Originally commissioned for Outpost Festival 2014 by New Model Theatre, Assembleth are delighted to be re-vamping this cult classic. Grecian Theatre like you've never seen it before!

“A very funny 60-minute romp through mythology with much stomping about and clattering of swords. There’s carnage, chaos and a huge amount of humour as five Assembleth's populate Greece, Troy and a doorless wooden horse.”

"A great comedy play, and a refreshing, modern way to return to ancient Greece" - The Knowledge.

Perfect for adults and older children who enjoy knockabout myths, legends and history.

All Ticket Prices include £1 Booking Fee